ACCORDING to a recent news report from The Atlantic: “The idea of using VR to reduce the distress of medical procedures was pioneered at the University of Seattle, Washington, where cognitive psychologist Hunter Hoffman and colleagues have developed a VR game called SnowWorld, to help patients endure wound care for severe burns.

“The researchers hoped that the illusion of being physically immersed in a three-dimensional computer-generated scene would move patients’ attention away from their real-world pain. It worked: Hoffman’s team has since shown in trials that SnowWorld reduces patients’ pain during wound-care sessions by up to 50 percent, as well as reducing pain-related brain activity.

“VR is now being studied by teams around the world to relieve pain in medical situations such as wound care and dentistry, as well as in chronic conditions such as phantom-limb pain.” 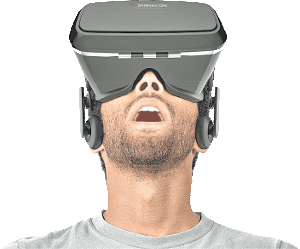 Isn’t it interesting how being immersed in a different world has the ability to alleviate pain? The Bible offers us the same escape.

As we read it we are reminded of another reality where evil, pain and heartache will not exist and there will be no more suffering or tears. A place where goodness and justice prevail and where God reigns without opposition. Where the lion lies down with the lamb and the sword is turned into a ploughshare. Where there is no sin or desire to sin. A place where death and sickness no longer exist.

That reality is not virtual, it is future and eternal, promised to those who give themselves over to God in this life.

Then with our eyes fixed on the forever promises of God, we can endure whatever life throws at us with far less pain than if we believed this world was all that existed. As the Apostle Paul says in the Bible: “I consider that our present sufferings are not worth comparing with the glory that will be revealed in us (Romans 8:18).”

In 2 Corinthians 4:16-18 he elaborates: “Therefore we do not lose heart. Though outwardly we are wasting away, yet inwardly we are being renewed day by day. For our light and momentary troubles are achieving for us an eternal glory that far outweighs them all. So we fix our eyes not on what is seen, but on what is unseen, since what is seen is temporary, but what is unseen is eternal.”

What are your eyes fixed on?•