When I was a teenager, I was asked by a magazine doing an article comparing religions what was the difference between my religion – Christianity – and other world religions.

At the time I knew the central difference was that in other religions you are required to ‘earn’ heaven by doing good works or performing certain rituals, but that in Protestant Christianity entrance into heaven was bought for us by the death and resurrection of Jesus Christ, and given as a gift (grace) to those who believe (have faith). (Catholicism, although claiming to believe this, in practice makes salvation depend upon rituals like baptism, confession, penance and communion.)

Good works for a Christian are a way of saying ‘thank you’, not ‘please’.

It is also clear that no other religion has a figure like Jesus Christ, who claimed to be God Himself, living a sinless life and rising from the dead. No one else on earth has had the audacity to say, “I and the Father are one.” (John 10:30) Or “If you had known me, you would have known my Father. And from now on you do know Him and have seen Him.” (John 14:7).

But recently it was pointed out to me that Christianity is also unique in that it is the only religion that could be debunked by archaeology or history. In the words of Richard E. Simmons, in his new book “Reflections on the Existence of God”: 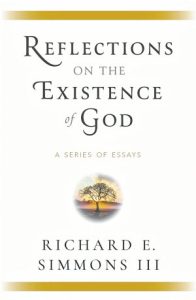 “Christianity is the only world religion where spiritual truth depends on the veracity of clearly defined and discoverable historical events. … If these are demolished it is nothing.”

And, as Simmons details, many people have set out to debunk Christianity by disproving some historical claim of Scripture, like the existence of Jesus, the resurrection, or the historicity of the book of Acts. And yet time and time again, the would-be debunkers have been forced to admit that, as far as they can prove, it is all true. History, archaeology and geography all back up the Bible.

Simmons’ book, which is a series of short essays, enumerates 56 arguments, including historicity, for why Christianity is based on more than just blind faith, and how it makes sense of existence, evil, morality, beauty, happiness, death, sexuality, love and our world in a why that no other religion does.

But as Simmons warns in the first few pages: You should only go looking for the truth if you are prepared to follow where it leads. Many people roundly denounce Christianity without ever researching its claims because, if it is true, and there is a Creator God, they will then have to choose whether to worship or defy Him.

Either God exists or He doesn’t. There is no third option. And if He does, who is He? If you are ready to follow the truth where it leads, the very well researched and clearly written “Reflections on the Existence of God: a series of essays” by Richard E. Simmons III is available online.